Relay for Life and Other Shenanigans

Tatton with his stunner shades on... I think it's just me but he looks so grown up in this picture. And the next picture would be Tatton glued to one of his Backyardigans movies. He's always liked that show but recently he will sit down and literally watch the whole movie (4 episodes in a row). It's nice sometimes when I need to get some things done, but I don't want to make too much of a habit with it... 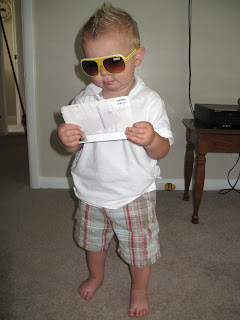 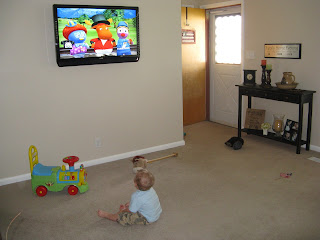 Last weekend we got to go to Relay for Life. It's an event set up to support and raise money for the American Cancer Society. Aaron's Grandpa had cancer, Aaron's Mom has cancer and has battling it for 44 years, and Aaron' brother has had cancer. Each team runs their own booth and does an activity or sells items and all that money donated goes to the American Cancer Society. And someone from each team has to be walking around the track at all times, switching off throughout the night. This is our second year doing it with Aaron's family. Our team, who was named by his nephews... is TNT Dynamite. This year we sold big pots of flowers and lots of yummy treats! They also have a lot of auctions throughout the night with some really good, cute stuff. It was a lot of fun. Jace, one of our nephews, I think put in the most laps. Tatton put in a few laps of actually walking and running, and then a bunch of laps in the stroller while being pushed by all of us. We're glad we're able to participate and can't wait for next year. We're grateful that Mary Sue is such a trooper and fighter. 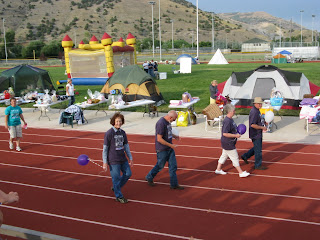 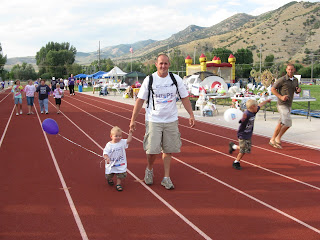 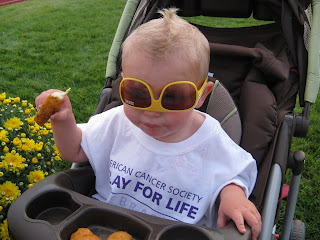 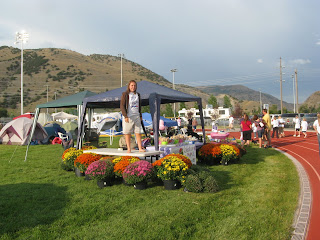 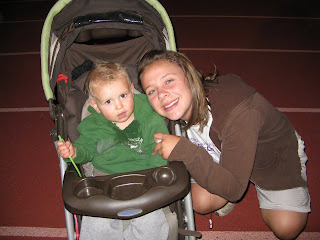 We had a BBQ on Sunday with some of Aaron's family. This is one of Jen's dogs and Tatton would not leave it alone. Up until Sunday, Tatton has been scared of dogs, upclose. But I don't know what happened, all the sudden he is now hugging and petting and giving loves to dogs. He sat on this poor dog most of the afternoon and tried to ride it. He's such a crazy kid, but atleast we're happy to see him not afraid of dogs anymore. 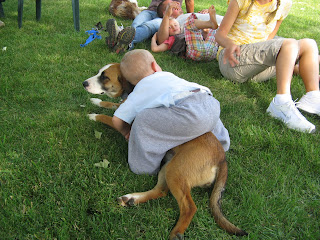 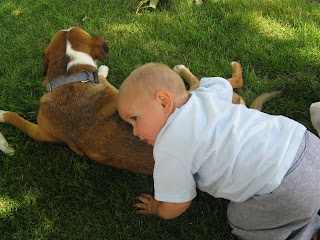 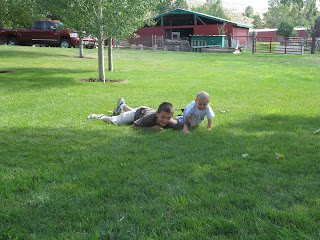 Pictures of Our Summer

So it appears as though I can't keep up on our blog. I have lately been trying to spend my time more wisely playing with Tatton, cleaning the house more, keeping up on laundry, cooking good dinners... the usual... so my computer time has been lacking. To briefly update you on our summer, here are a few pics from our events. I might be ambitious one of these days and do a slideshow because after having to choose just one picture from some things we've been doing I realized how much I'm having to leave out! Enjoy... (oh and our computer is being slow and snobby so the pictures are in a backwards order, most recent to oldest, fyi) 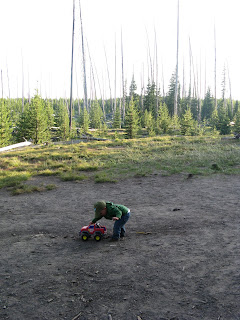 We went camping in Yellowstone last week with some of my family, the brave ones. We stayed in Grant Village and yes I think we were all a little worried about bears entering our tents. Tatton on the otherhand, played in the dirt 24/7. 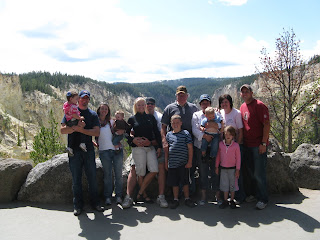 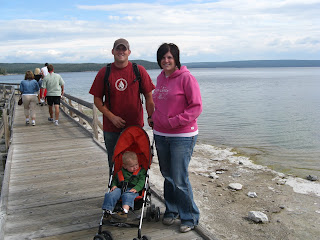 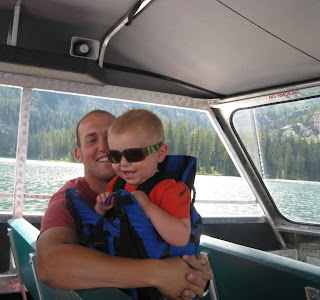 Tatton, happy on the boat at Jenny Lake. For some crazy reason, we took the boat ride across Jenny Lake and then hiked back. It said it was only 2.7 miles, but we all think it was much longer. It was awful, pretty views, but awful... luckily Aaron had the shmoe on his back, yikes! 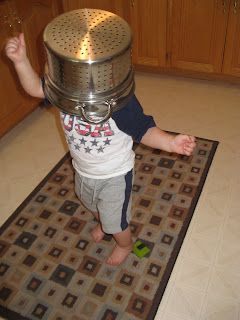 Just a day at home. Tatton putting pots on his head and then hitting the pot and making himself laugh... 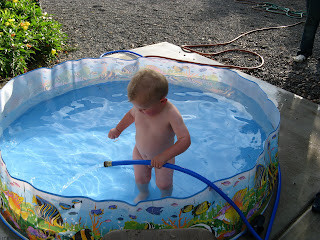 So this would be the kid pool at Aaron's family reunion which is always held at his Grandma's house. It was ridiculously warm and we didn't bring Tatton's swimsuit. But we figured that with his hot little bod it didn't matter, he needed to cool off. He ended up marking his territory, a few times, in the pool so he had it all to himself. 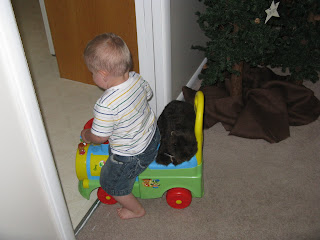 Tatton and his best friend "B" the Beaver. We went camping in the Uintah's over the 4th of July and at the Bear River Ranger Station, my Mom bought him a beaver stuffed animal and it has been his little pal ever since. He doesn't go anywhere without it, he sleeps with it, and takes it for rides with him on the "choo choo." 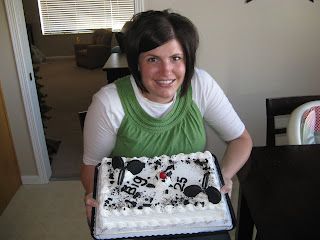 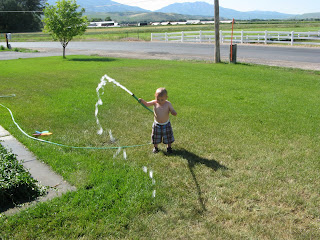 Aaron gave Tatton the hose and he played with it forever. He drenched himself and managed to get Mom and Dad a little wet too. 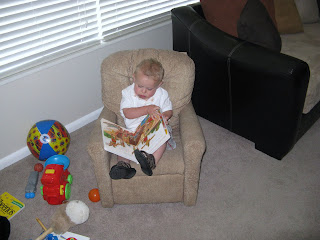 Aaron's sister Sharon gave us this little recliner and we love it. It does recline but Tatton's feet don't even reach the foot rest yet. He sits on it all the time to watch movies and read books. I think it just looks so funny, like a little old man in his chair. 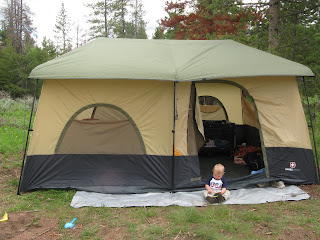 Tatton reading again. This is when we were camping in the Uintah's. Of all the things he could be doing, he's sitting outside the tent reading a book. 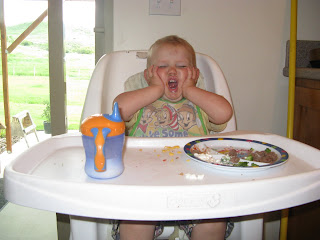 Visiting at Grandma's house. I have no idea what he was doing but I'm glad I caught it. 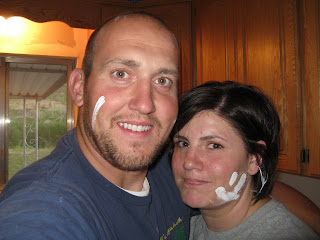 This is Aaron and I during one of our late night wall paper demolition and painting marathons until 3 am on the house. Obviously to the painting stage... 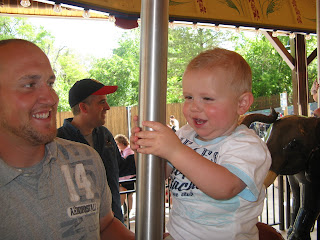 The Zoo, there were so many pictures from that day but Tatton's face at this moment was classic. He rode the monkey on the merry-go-round and he was SO excited. He had a lot of fun.