The pictures I promised that coordinate with this post, in no particular order... 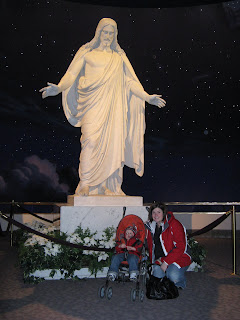 Tatton and I down at Temple Square. 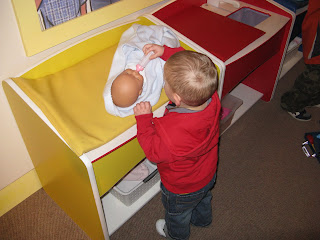 The "I Am a Child of God" floor, labor and delivery play area. It's a good thing Tatton liked the babies and was really cute with them... 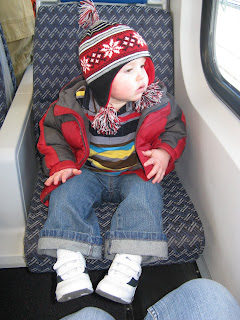 Tatton on the "train ride" He stayed pretty much like this all the way to Salt Lake. 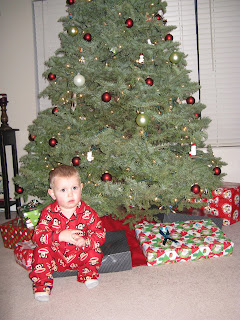 Tatton on Christmas Eve looking thrilled and sitting on the presents. 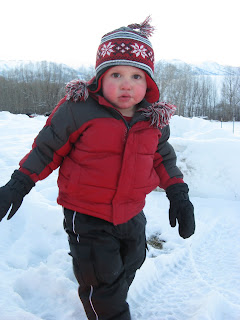 The outdoors. I just love his face in this picture. 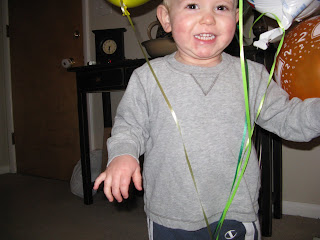 Birthday balloons, he could have been content with just these. 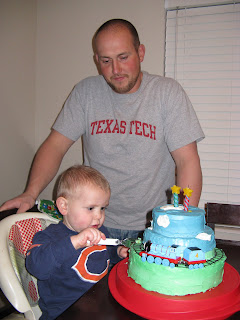 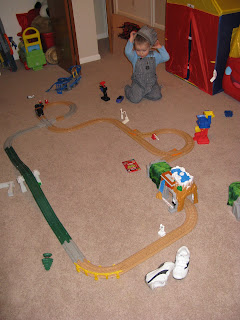 Tatton really is obsessed with trains so my Mom got him a little train engineer hat and overalls so that he can be a train driver when he plays. It's pretty cute.
I can't believe it's been before Christmas since I last blogged. So to keep you from reading a ridiculously long post, I'll try and make it short and sweet to catch up on all the happenings.
Christmas & Winter:
Good times, Tatton I think understood the whole Santa thing. He loves his train that he got.
We went to see the Temple Square Lights with the Tatton Clan, minus Aaron due to work. It was a ton of fun, but freezing. We rode the "train" down to SLC and then the trax, Tatton was in heaven. And we also took the kids over to one of the church buildings that has the "I Am a Child of God" center on the top floor. They all loved that. Tatton was very cute with the babies.
Aaron and I took Tatton to the Zoo Lights, they were alright. It was again freezing and I think it's a bit overated, but Tatton still enjoyed it. There's obviously not a lot of animals out and lights are only so fun for a short period of time.
We've been playing in the snow and sledding, a classic past time of winter. When the family was up here a lot, the cousins had fun sledding together and going for rides on Grandpa's sleigh behind the horse.
Potty Training:
Everyone keeps saying that we're so ambitious to start a 2 year old boy on the potty training but it kind of happened by accident. Gma Gold sent a littly potty over and Aaron and I were just planning on storing it for awhile, maybe after the baby came, but Tatton saw it and was all over it. He started that day and has been doing really good since. I wasn't a fan of a little potty though. It grossed me out having to dump it's contents into the regular toilet and then wash it everytime. So luckily it doubles as a step stool and Tatton just uses the stool to get up the real toilet, or stands. it's much easier, and cleaner for me anyway. He loves his McQueen undies, stays dry all day even during naps, but we struggle still with pooping. He's doing better but it's always kind of a hit and miss. We've tried all the bribery possible so I'm thinking it's just something that takes a little time. We'll see. Washing some dirty undies here and there still beats changing diapers all day so I'm ok with it. If you have any suggestions, ideas or advice, we're game!
Tatton's 2nd Birthday:
Yes, our little guy is 2 already. Maybe it's just me but I can't believe it. Getting the baby stuff out lately and holding up little outfits that Tatton once wore, and then having Tatton come running in and start talking about baby brother makes it just seem even more crazy that just 2 years ago he was the baby. Now he's the big brother that's talking and testing out all the baby stuff. Anyway, Tatton loves trains so of course I made him a little cake with a train on it. My favorite part about his birthday was Tatton realizing that when we were singing Happy Birthday, we were singing to him. When we said his name he had the biggest smile on his face and started pointing to himself. It was so funny. Anyway, he blew his two little candles out and enjoyed his cake and presents.
Baby Update:
Well technically I'm only 35 weeks prego right now. My due date is March 22nd, but at our last appointment, the doc discussed that if I haven't had the baby by 39 weeks, we could pick a day during my 39th week to have him. So we've decided on March 16th, a Tuesday, a good even number, and not on St. Patty's Day. So even though I'm 35 weeks, I hopefully only have 4 weeks left. I feel like a hippo and am in a lot of pain. The baby is sitting breech right now too which doesn't help. Tatton was breech as well for awhile but I got him to flip thanks to my sister's expertise. I'm not having the same luck with this one though. I've been doing the same thing but he's still refusing to flip. So due to having to have a c-section with Tatton, the baby being breech right now, and my small heart shaped pelvis, I'm most likely going to have to have another c-section, but we'll see. Either way, we cannot wait for the new little guy to come. This pregnancy has gone by fast, but also really slow. Now I'm just to the point where I feel like I'm done. 4 weeks seems like it won't come fast enough! I think Tatton is maybe gripping the concept that baby brother is coming. He's been a big helper getting all the baby stuff out and setting up his room. He loves to give baby brother kisses and hugs and keeps saying "baby come" because that's when he gets to play more with the baby toys... i.e. the swing and bouncer have got him green with envy. He's excited to bath the baby, and thinks he's going to burp him. I was washing all the burp clothes one day and so I was showing him how they go on your shoulder. He wore burp clothes on his shoulder the rest of the day saying "burp baby." It'll be a little crazy I think with Tatton helping but we're excited.
Pictures to come...