This One's for Lauren...

Lauren has requested a new post since I have been a blogger stranger lately. In my defense, the Ward Christmas Party has taken over our lives at this house. And with Aaron being gone all this week and leaving the Party in my little hands, it's been crazy. But I am glad to say that the Party was last night, it's over, I think it went well and so we have our lives back now at the Tatton Compound! So here a few things we have been up to in between projects for the party...
We finally made it up to North Ogden to see Grandpa Creamer. Tatton had to get his second round of the flu shot so we made a day of it and visited. I have to say that I have one of the cutest Grandpas. He just gets a kick out of babies so Tatton is well adored there.
Tatton is everywhere and into everything, seriously. He is a nonstop terror. I thought I had a few more months until he would be in the stage of pulling out everything in cupboards, opening drawers but I was completely wrong. He has no fear so he crawls into everything even if it means hitting his head 10 times just to get stuck somewhere. It's ridiculous...
I have to brag about these roses. Aaron gave me these before he left for Vegas since he felt bad for leaving me to do the ward Christmas party and because he loves me I'm sure. But that's not the reason I'm bragging about them. They were just the biggest roses I've seen. The picture doesn't do them justice. They were ginormous. And they stayed healthy for a long time. If anyone needs a good flower shop, there is one in Farmington by the Smith's that is obviously really good.
I've spent some time with my other Mama lately learning how to crochet. I wanted to make Tatton some blankets from his very own Mommy. All the ones he has have been made by family or friends so I decided I'd better learn. So Tatton has been able to play with his cousins, the crazy boys Ty and Jace while Mary Sue and I do blankets. It's been really fun.
Every year we go down to Alpine to a tree farm and cut down our own Christmas Tree. I love Christmas trees. It is so fun to walk around and smell the pine, mmm. This year we had to collect a lot of pine cones and pine boughs for the decor at the ward Christmas party while we were down there. So Tatton was strapped into the backpack and away we went. The Harman kids were a big help, thanks kiddos!
And last, Tatton yet again getting into everything. This was the big box of silverware for the ward christmas party that he decided to dump out, it was a fun game of let's pick up 300 spoons, knives and forks! 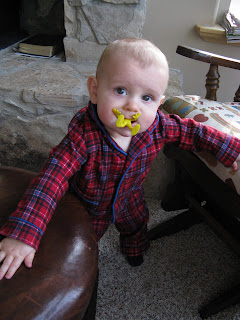 For some reason Tatton always digs out this little yellow guy from my mom's toy box. He puts the head in his mouth and crawls around with it, everywhere! I guess it's his little buddy... 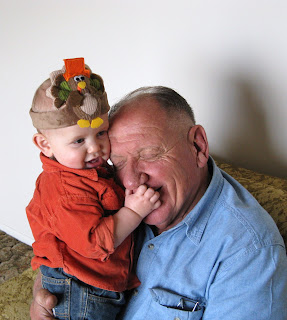 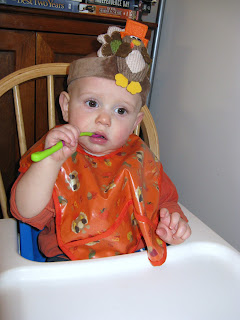 Thanksgiving torture... I couldn't resist buying his little turkey hat to wear for Thanksgiving dinner. He was a good sport and kept it on. 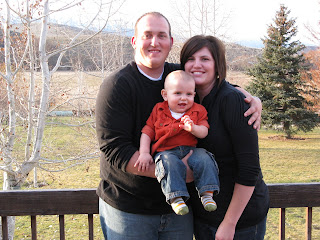 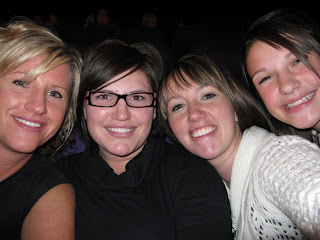 This is my sister-in-law Racquel, me, my sister-in-law Challise and my niece Macquel. We went to Twilight on Thanksgiving. Yeah, I still haven't read the books but I figured why not. It was a good movie and fun to be with girls!