Well, it's been a busy month since last time I posted anything on here. For a baby update... I've got the belly which is already uncomfortable. The little guy is doing good though, he's moving around like crazy and he weighs over a pound now. We have few names that we like but nothing for sure yet.

Aaron and I celebrated our 4th Anniversary! We must be getting old, or the fact that I'm pregnant... I don't know. Usually we have some elaborate plan, take a little get away... but this year we just stayed home, Aaron made a yummy dinner and we watched Up! with Tatton. It doesn't sound like anything fantastic but it was a perfect day for me. 4 years and I love just being home with my little family, snuggling with Aaron and playing with Tatton. The next day or night I should say, we went to the New Moon premiere. It was great... even lthough Aaron decided to become the line-butting Nazi at the theatre. We went to Layton and it was very unorganized and Aaron was determined that a group of teenagers in front of us were not going to let their 15 friends cut in line. Needless to say I was mortified and embarrassed that evening, but we got great seats in the end to watch our movie so I suppose Aaron deserves a pat on the back.
Thanksgiving was a great holiday as usual, good food and lots of it. We're lucky that our parents live so close and we can hit up both family parties on the same day. December has finally come and we're extrememly excited for Christmas. We have to get our ward christmas party out of the way that Aaron and I are in charge of which is on Saturday, and then we can have time to celebrate the countdown a little better... stress free! Tatton has become obsessed with The Polar Express, because of the "choo-choo" and Frosty the Snowman. Aaron and I have had to print off the words to the Frosty song (which is really long by the way) because Tatton requests that song to be sung at bedtime. And he tries to sing it too, it's pretty cute.
Oh, and speaking of bedtime... Tatton has moved into his big boy bed which is a little toddler bed. He's sleeping just fine it now, yay! It was a rough two weeks but we've made it. I wanted the crib to not be an issue at all when the baby came so that was one less traumatizing thing for Tatton. It seems so early for him to be in a big bed but it's working out just fine for him. I guess our little guy is growing up. I don't have a whole lot of pictures lately, I've been a slacker. The Tatton clan had family pictures taken though in November so hopefully I can snag one of those to put on here. 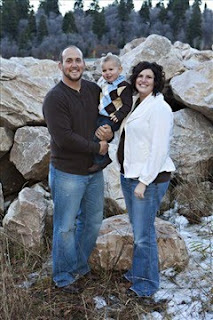 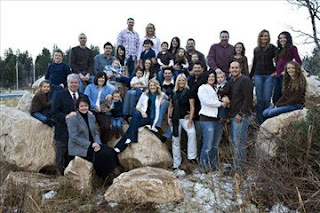 It sounds like you have had a fun month! I think your anniversary sounds perfect! You need to put some prego pics on here. I'm so proud of Tatton that is sad he is growing up fast!

I think that's a good idea, that's what I did. I figured there is enuf for them to freak out about, they don't need to be kicked out of their room or bed, the same day a new stranger is taking their place.

Yay! Your new design is super cuuute!! So, my December is really full too. Perhaps we should try for early 2010?

love your family pics! soo, Becky said she has never been to a cooler pagent.. she said you guys did an awesome job! And you sewed all the costumes! what? you are pro!

I better clarify that the sewing was not done on my part, that was all my wonderful Mom!! And Becky helped us so much, she was great. I'm glad they enjoyed!