In Uncle Lewis' Voice... "the BLESSING!"

Lincoln was blessed last Sunday. No we didn't plan to have it on Mother's Day. Our stake ended up having Stake Conference the first Sunday in May, and so fast sunday fell on Mother's Day. We thought about doing it in June instead, but his little tux would NOT fit at all by then. It was a wonderful day surrounded by family. Lincoln was a trooper and didn't make a peep during the blessing. Tatton on the other hand threw a HUGE fit that Daddy left and Papa left. He was rolling in the aisle, diving under benches, screaming, crying for Papa. It was awful. Aaron sat down after the blessing and asked how he did and all I could do was shrug. I hardly heard a word of what we said. I was really sad, but he filled me in, and our family told me he did a good job so that's all that matters. Still a good day in our book. Lincoln has been starting to smile the past two weeks or so but I never catch it on the camera in time. I caught a little bit of this one though! 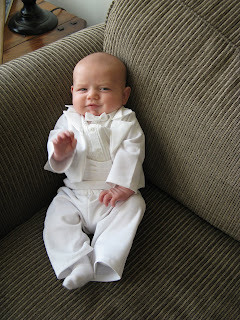 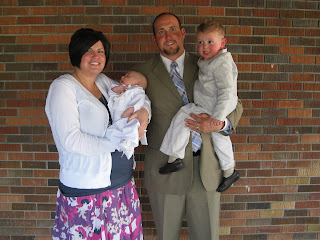 All four of us after church. It was blazing hot in our church and Tatton has the "Tatton" red face when he gets warm. 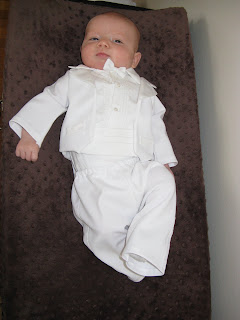 Lincoln before church with a bit of a smirk on his face. 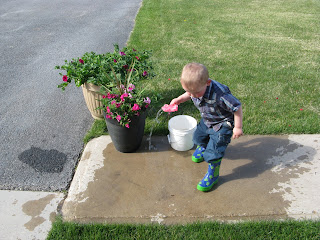 I love having a husband who works at a greenhouse. Yay flowers! Tatton felt the need to water them on Saturday with rubber boots and all. 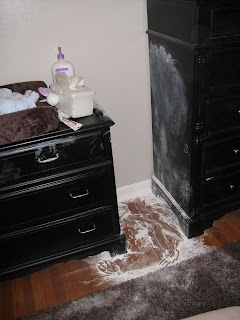 About two weeks ago I was feeding Lincoln on the couch and thought Tatton was down in his room playing. I was severely mistaken. This is what I discovered when I went to change Lincoln's diaper. No more baby powder, Tatton emptied the entire bottle. It doesn't look like a whole lot, but that powder is like an inch deep on the floor. Good times... 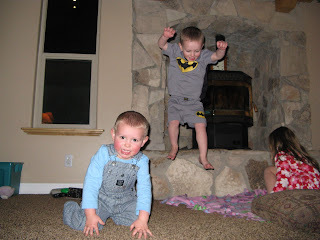 Randy (one of many brothers) came up a few weeks ago with the kids for the weekend. Tatton and Troy are 3 months apart and they had a lot of fun together. They discovered jumping off the rock fireplace much to Papa's dismay. 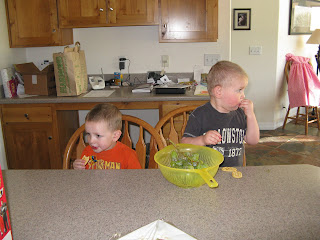 This was prior to our bbq, Tatton and Troy were apparently starving because they were tanking down crackers and grapes. I wish I had filmed it because neither one of them were talking, nor did they look at each other. It was strictly eating business going on.