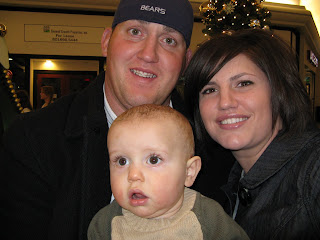 So this is really random but I forgot about this picture. This is us standing in line at the mall to see Santa. This lady came up and asked if we put fake eye lashes on Tatton for the picture? It might be kind of hard to see in this small picture, but granted the kid does have long eye lashes... who would put fake ones on their little boy?? Yikes lady! Anyway, secondly, I've been a little hesitant to post about this but I figured the questions would come so I might as well let you all know the whole story that as of now we're not going to Vegas anymore. We were supposed to hear from the Academy sometime in February if Aaron made it or not, but this weekend we got a letter in the mail notifying Aaron that he would not be hired right now, and that he can apply again in December 2009. Seeing as how we weren't even expecting anything to come until February, we were both pretty devastated, it came out of nowhere. We always felt sure about this decision and so even though we joked about "Plan B" we didn't really plan for it. So now we're trying to figure out that "Plan B". Aaron still wants to be a cop so he's going to keep applying in other areas, and apply for Vegas again in December. Until then, I guess we'll be hanging around at my Mom and Dad's for a little while until we figure things out. The stay at my parent's was supposed to be temporary, but now my Mom is ecstatic that she has us for a little bit longer... we on the other hand feel like bums. Oh well, we'll figure it out, atleast we know that for some unknown reason Vegas wasn't right for us right now.

:) you guys are so cute I think connecticut could use Aaron Seriously! It would So fun!!!

Keep truck'n along! It's when things like that happen, but we know they happen for a reason.

You look gorge in that pic! I'm sorry about the Vegas, Oatmeal. :( Just remember that everything is in the Lord's plan. (Maybe you would've gotten attack by a lounge singer or two drunk boys...) You're in my prayers! xoxo

I have been wondering, but wasn't going to ask. Well good luck with plan B. Also You looked really pretty in that picture. And He does have freakishly long eyelashes, I have definitely noticed before. But Fake eyelashes? Yeah right. how are you supposed to get fake eyelashes on a one year old even if you wanted to?

I'm sorry about Vegas. Good luck with whatever Plan B may turn out to be. You should come out to the school district one day for lunch with me that would be fun!!