This past week Toni and the kids came up to Grandma's while Randy was in Cali with the fires. Luckily me being furloughed I got to go up and play for a few days. We started out with a girls night on Sunday. Toni stole Gabby, Macquel and Hannah, and left Jenson up at Kristin's with JT and Robby (I think we got the better end of the deal.) We were planning on going to the Morgan County Queen Contest but after having a long lunch at Steph's we missed it. So we went over to the library and had our own story time... and a destroy the library time. That night we caught the last part of the Queen Contest at the fair grounds where they do their horsemanship. Ryan and Racquel made it up for the event. Tatton got to style some sweet shades and Jenson wandered off and was playing in the dirt. It looked like he was trying to dig under the fence to escape, who knows but it was funny. Unfortunately we didn't ever find out who won the contest. We waited while the judges were tallying the points but apparently someone was struggling with their math. After waiting 45 minutes we had enough and went home. It was an enjoyable few days being up at Grandma's relaxing and talking with Toni. Thanks, it was a lot fun! 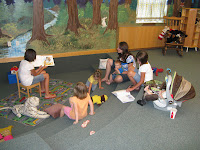 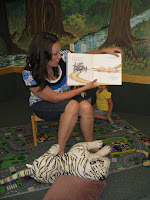 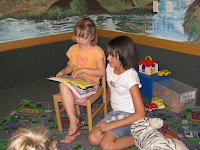 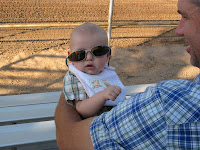 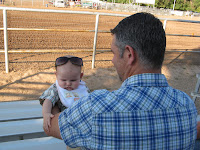 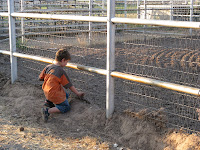